RSA is one of the first practicable public-key cryptosystems and is widely used for secure data transmission. In such a cryptosystem, the encryption key is public and differs from the decryption key which is kept secret. In RSA, this asymmetry is based on the practical difficulty of factoring the product of two large prime numbers, the factoring problem. RSA stands for Ron Rivest, Adi Shamir and Leonard Adleman, who first publicly described the algorithm in 1977. Clifford Cocks, an English mathematician, had developed an equivalent system in 1973, but it wasn’t declassified until 1997.[1]

A user of RSA creates and then publishes a public key based on the two large prime numbers, along with an auxiliary value. The prime numbers must be kept secret. Anyone can use the public key to encrypt a message, but with currently published methods, if the public key is large enough, only someone with knowledge of the prime factors can feasibly decode the message. Breaking RSA encryption is known as the RSA problem. It is an open question whether it is as hard as the factoring problem.

He first turns M into an integer m, such that 0 ≤ m < n by using an agreed-upon reversible protocol known as a padding scheme. He then computes the ciphertext c corresponding to

This can be done quickly using the method of exponentiation by squaring. Bob then transmits c to Alice.

Note that at least nine values of m will yield a ciphertext c equal to m, but this is very unlikely to occur in practice.

Given m, she can recover the original message M by reversing the padding scheme.

(In practice, there are more efficient methods of calculating cd using the precomputed values below.) 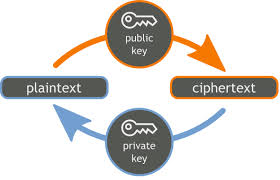 Here is an example of RSA encryption and decryption. The parameters used here are artificially small, but one can also use OpenSSL to generate and examine a real keypair.

For instance, in order to encrypt m = 65, we calculate

Both of these calculations can be computed efficiently using the square-and-multiply algorithm for modular exponentiation. In real-life situations the primes selected would be much larger; in our example it would be trivial to factor n, 3233 (obtained from the freely available public key) back to the primes p and q. Given e, also from the public key, we could then compute d and so acquire the private key.

The values dp, dq and qinv, which are part of the private key are computed as follows:

Here is how dp, dq and qinv are used for efficient decryption. (Encryption is efficient by choice of public exponent e)

Suppose Alice wishes to send a signed message to Bob. She can use her own private key to do so. She produces a hash value of the message, raises it to the power of d (modulo n) (as she does when decrypting a message), and attaches it as a “signature” to the message. When Bob receives the signed message, he uses the same hash algorithm in conjunction with Alice’s public key. He raises the signature to the power of e (modulo n) (as he does when encrypting a message), and compares the resulting hash value with the message’s actual hash value. If the two agree, he knows that the author of the message was in possession of Alice’s private key, and that the message has not been tampered with since.

The proof of the correctness of RSA is based on Fermat’s little theorem. This theorem states that if p is prime and p does not divide an integer a then

for some nonnegative integer h.

To check two numbers, like med and m, are congruent mod pq it suffices (and in fact is equivalent) to check they are congruent mod p and mod q separately. (This is part of the Chinese remainder theorem, although it is not the significant part of that theorem.) To showmed ≡ m (mod p), we consider two cases: m ≡ 0 (mod p) and m

where we used Fermat’s little theorem to replace mp−1 mod p with 1.

This completes the proof that, for any integer m,

Although the original paper of Rivest, Shamir, and Adleman used Fermat’s little theorem to explain why RSA works, it is common to find proofs that rely instead on Euler’s theorem.

where the second-last congruence follows from the Euler’s theorem.

When m is not relatively prime to n, the argument just given is invalid. This is highly improbable (only a proportion of 1/p + 1/q − 1/(pq) numbers have this property), but even in this case the desired congruence is still true. Either m ≡ 0 (mod p) or m ≡ 0 (mod q), and these cases can be treated using the previous proof.